One Tree Hill, Lewisham: High above the city, an ancient oak may remember the ancient woodland on this site

I climb the hill until I can look out over the city below. Whether the air pollution has really improved over lockdown I don’t know, but it smells fresh and cool up here at 90 metres above sea level.

This suburban woodland is a remnant of the Great North Wood which once covered much of south London. However the ‘Oak of Honour’ at the summit, which gives this area of Lewisham its name, is somewhat underwhelming and is encased incongruously within a black metal fence. Planted in 1905, it replaced the oak struck by lightning in 1888. Elizabeth I is said to have rested under the original oak on Mayday in 1602.

More worthy of the ‘one tree’ moniker is a 400 year old English oak on the north side of the hill. This is probably the only tree old enough to have been part of the original woodland on this site. With heavy limbs sprawling across the path, its ancient core is almost entirely hollow and I run my fingertips across the damp pulpy inner surface.

Further on, the leaves of towering hybrid black poplars flip like silvery fish shoals in the breeze above me and a hidden chiffchaff shouts its name from the canopy. Hedge woundwort (Stachys sylvatica) lines the path below the poplars. Its musky, mousy smell is usually considered unpleasant, but I have to confess to being fond of both the smell and the deep pink flowers streaked with white, and tolerate it growing in our garden. While it’s not a botanically exciting plant, as its name suggests it was used traditionally on wounds to reduce bleeding and bees love it so that’s good enough for me. 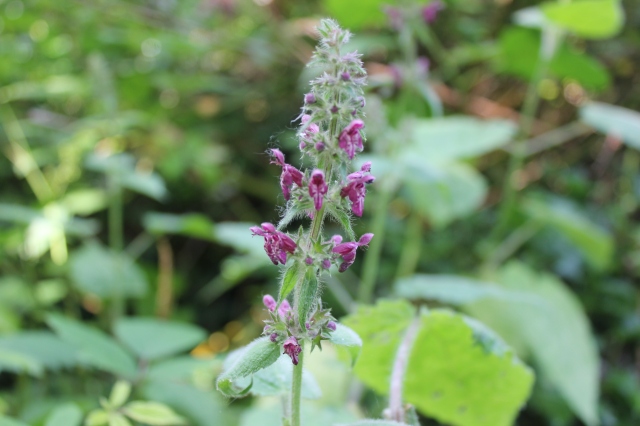 After the heavy rain earlier in the week, the bramble flowers are looking distinctly tatty. A lone speckled wood butterfly finds a vantage point on a bramble leaf, opening and closing its wings rhythmically in the warm but there are no rivals to be seen. 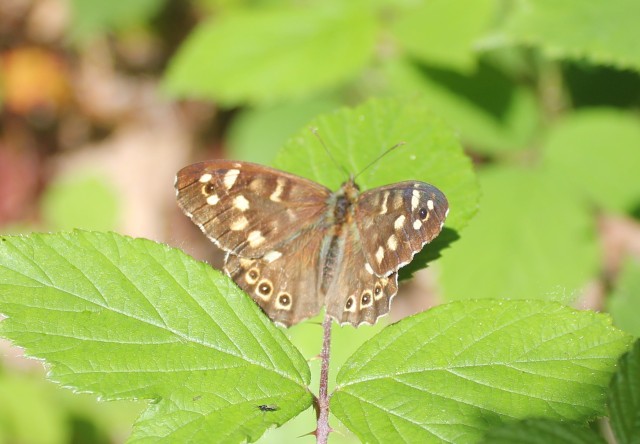 Approaching the gate onto a busy road, I’m rewarded with the a glimpse of a warbler with two fluffy juveniles searching for food in a sycamore. It’s either a willow warbler or a chiffchaff although as I can’t see the leg colour clearly, dark for a chiffchaff and usually lighter for willow, I’ll cop out by recording sight of a ‘chillow’ today.